I try to avoid the scale. I know, weight is a measure of health (so they say), and there’s a scale hop required at every doc’s visit and one at the physical therapist’s office.  We always had a scale growing up and for some reason were expected to have one.  I didn’t have one during my single days and didn’t care, but for some reason just had to have one once the life with hubs, kids, and dogs started.  For some reason I felt like we needed one.

I hate the scale in general.  It mocks me when I think I look smaller and feel lighter.  It jumps out from under the bed and kicks me in the toe.  It calls to me when I ignore it for too long, taunting me.  Yes, I’m aware it may not happen that way, but it feels like it.

I had the opportunity to move on up to a prettier, less bossy scale and jumped at the chance. The timing was perfect because physical therapy was in full swing and so was my tweaked eating plan.  I figured it wouldn’t hurt to add something else new
to the mix, even if it was as intimidating as a scale. The Ozeri WeightMaster Digital Bath Scale with BMI and Weight Differential Detection has a long name, sleek look,  and nice features. 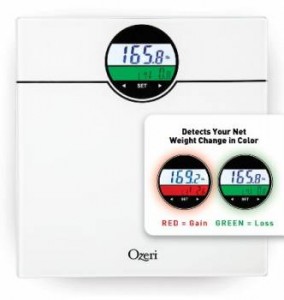 See, I told you it was attractive.

The first thing I noticed when I opened the package is how attractive the scale is. This baby is a nice-looking slab of
tempered glass with non-slip pads that are gentle on my hardwood floor.  It came with batteries (nice) and clear instructions on
setting up separate profiles for multiple users.  The Weight Differential Detection tracks changes from your last weigh in,
and averages of the last three and seven weigh-ins.  How cool is that?  I like this feature because I can accurately track my
results alone.  Granted I had to teach the family to switch between profiles, but that was no biggie – when they paid attention.

The WeightMaster accepts weight up to 400 pounds.  I don’t want to need that weight limit, but it’s nice to have that option.  It also measures Body Mass Index (BMI), but honestly I try to ignore BMI measures myself because it doesn’t paint a clear picture of health.
I do love the Color Alert Technology which displays a green light for a loss and red light for gain.  If I wanted to gain weight, I might find this annoying.  But I’m all about gains in health and losses in fat and pants size.

I almost bought a different scale, but am glad the Ozeri WeightMaster fell into my lap.  Not only is it accurate (compared to the doc’s scale) and attractive, it’s engineered and manufactured in the USA.  More companies need to stay here instead of trying to move out of the country (I’m  looking at you, Burger King). Ozeri stands behind their products with a 100% Hassle-Free Satisfaction Guarantee. Pick up the WeightMaster in (black or white) or check out Ozeri’s other scales.  I won’t get on the scale more often, but when I do, it will be the WeightMaster.

It’s happening today!  I’m happy dancing and watching a little of the BBCA marathon in anticipation.

What does a television show have to do with a healthier lifestyle?  It’s not about the show as much as it is about finding something that you enjoy.  If an hour of television can take you away from stress, enjoy it.  Get lost in it and smile, laugh,  giggle, cry, or whatever it does.  Doctor Who does all of the above for me.

So, if you call, text, or drop by while the Doctor is on, don’t expect a response.   Well, not a pleasant one. 😉

Do you have a favorite show? 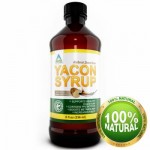 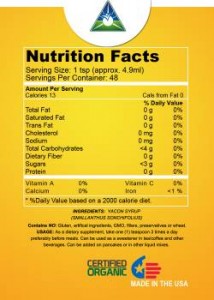 I’m two days in and not feeling fine.  I went to my regularly scheduled aquatic therapy session this morning and kept it at 45 minutes.  It felt pretty good even though my head was spinning.

This is part of my old habit of not listening to the inner voice that tells me to stop.  Ignoring it is rarely a good idea.

Fast forward to 6:15 pm and I’m about done.  We’d planned a short workout at our potential new gym, but I don’t think I can make it. Yeah, it’s an early bedtime for Sherrie tonight.

Hope your Wednesday is better.

Yes, it’s a new month complete with a new tropical storm (hi, Bertha).  Kids are heading back to school, tax-free shopping weekend sales are starting,  and the thought of a quiet house between 8 and 3 pm is making parents giddy.

To me, the start of a new month is time to reflect on the gains of the previous month and set new targets for the current month.  Notice I said gains?  It’s my way of focusing on the positive.  In July I increased resistance, speed, and strength.  I hit a smaller size.  I wanted to shop for clothing instead of just grabbing whatever I thought would fit.  It sunk in that I need to eat if I’m going to succeed.  No more drastic cuts to calorie intake.   For August I want to increase my aquatic therapy sessions.  I want to wear a certain top and have it look good.  I want to improve on July’s fitness targets.  See, all positive and also realistic and attainable.   It took years to fall apart and it takes time to fully recover, heal, and thrive.

What are your August targets?  You can reach them.  I’ll be right here, cheering you on.